This feature is included in ESP32 builds, but for ESP8266 it is included only in tasmota-knx build

To use in other builds you must compile your own build. Add the following to user_config_override.h:

The KNX IP Protocol is an international open standard for smart homes and smart buildings automation. It is a decentralized system. Each device can talk directly to each other without the need of a central controller or server. Any panel or server is just for telesupervision and for sending requests. KNX IP Protocol uses a UDP multicast on 224.0.23.12 : 3671, so there is no need for a KNX Router unless you want to communicate to KNX Devices that are not in the WIFI Network (Twisted Pair, RF, Powerline).

Each device has a physical address (like a fixed IP) as 1 . 1 . 0 and that address is used for configuration purposes.

If using the Home Assistant distribution called Hassio, everything for KNX is already included by default.

If you use the ETS (KNX Configurator Software) you can add any TasmotaTasmota KNX as a dummy device.

If the Tasmotadevice is connecting to a Wifi Repeater you might experience some issues receiving KNX Telegrams. This also applies to mDNS and Emulation features.

The implemented features, up to now, in KNX for Tasmota are:

Sensor lists that you can use in KNX is (only one sensor per type):

There are multiple possible configurations. Here are explained just a few as example. The options for selecting relays, buttons, sensors, etc. are only available if were configured on Configure Module Menu.

To configure KNX, enter on the Configuration Menu of Tasmota and select Configure KNX. 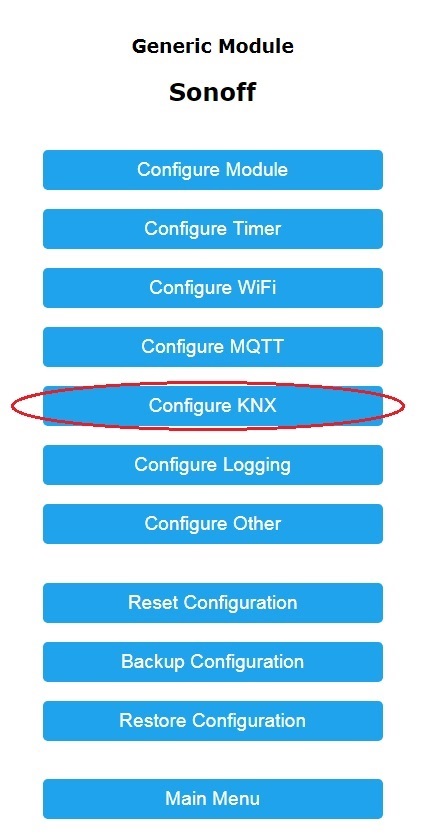 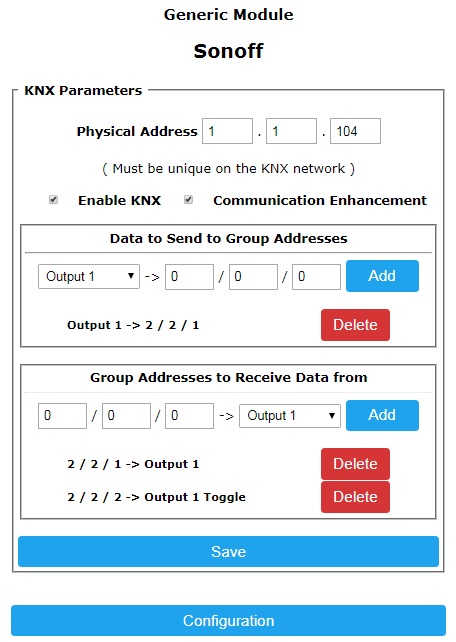 Note on KNX communication enhancement option: As Wifi Multicast communication is not reliable in some wifi router due to IGMP problems or Snooping, an enhancement was implemented. This option increase the reliability by reducing the chances of losing telegrams, sending the same telegram 3 times. In practice it works really good and it is enough for normal home use. When this option is on, Tasmota will ignore toggle commands by KNX if those are sent more than 1 toggle per second. Just 1 toggle per second is working fine.

1) Setting Several Tasmota to be controlled as one by a Home Automation System:~

We can set one of the group address to be the same in all the devices so as to turn them on or off at the same time. In this case, so as to inform the status of all the relays to the Automation System, just one of the devices have to be configured as the responder. If you use the same Group Address for sending and receiving, you have to take into account not to make loops. 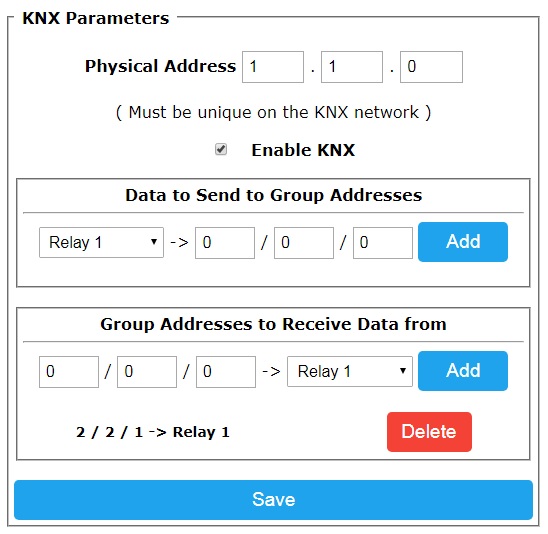 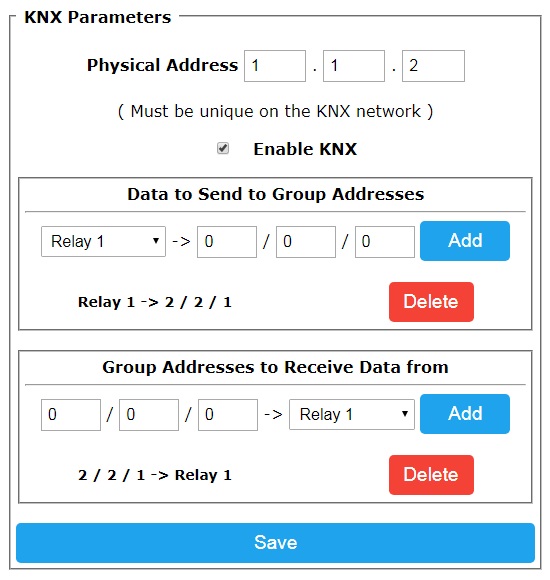 2) Setting 2 Tasmota to be linked as stair lights:~ 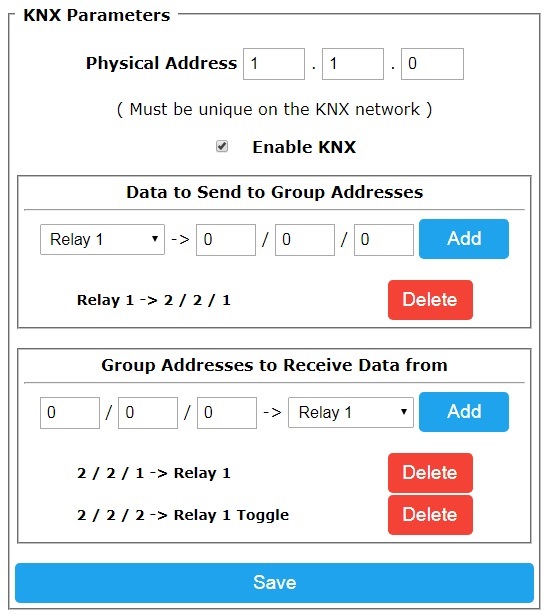 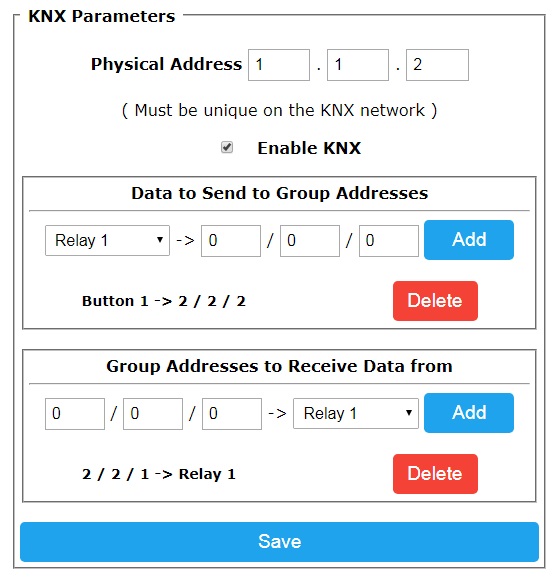 3) Setting a button as initiator of a scene:~

Just setting one device to send the push of a button, and the rest just use that value to turn them on. In this case, there is no toggle. Every time the button is pushed, the turn on command is sent. 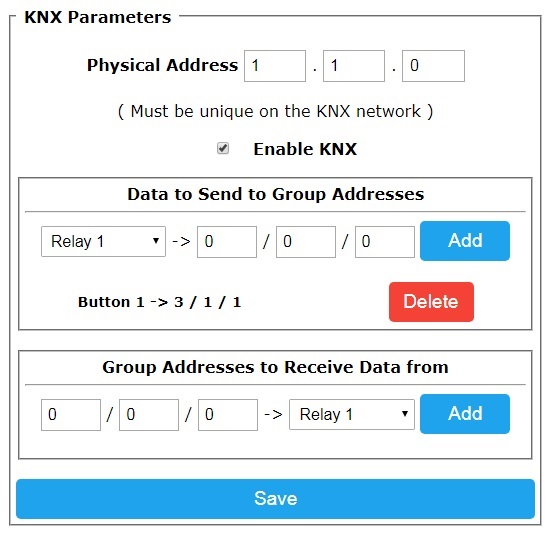 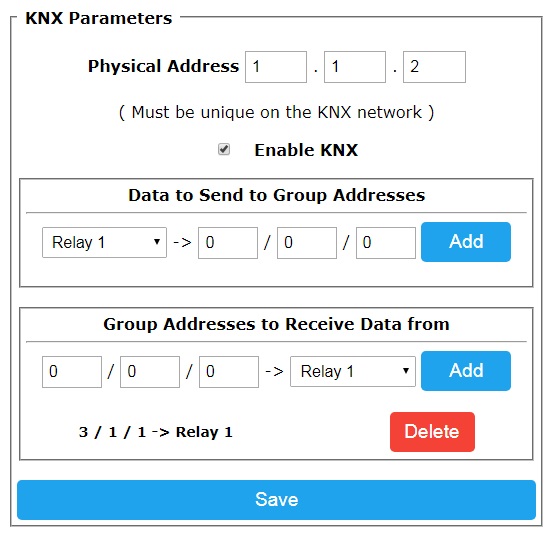 We can configure to send the value of temperature or humidity every teleperiod. This teleperiod can be configured. See TasmotaTasmota docs. It is recommended also to set the reply temperature address. 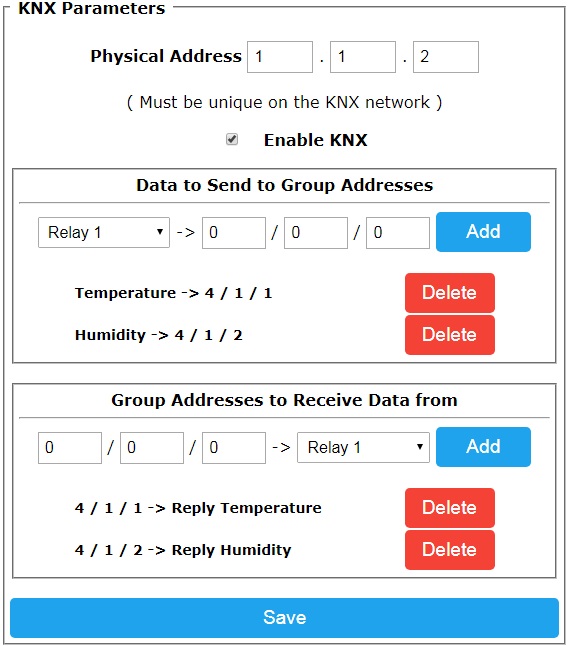 More functionality can be added to Tasmota using rules.

In rules we can use the events to catch the reception of COMMANDS from KNX to those RX Slots.

Example: rule on event#knxrx_cmnd1 do var1 %value% endon to store the command received in the variable VAR1

In rules we can use the events to catch the reception of VALUES from KNX to those RX Slots.

Example: rule on event#knxrx_val1 do var1 %value% endon to store the value received in the variable VAR1

Also, if a Read request is received from KNX Network, we can use that in a rule as for example: rule on event#knxrx_req1 do knxtx_val1 %var3% endon

NOTE: KnxTX_valn command, KNXRX_Reqn trigger and sensors' telegrams, uses KNX DPT14 (32 bits float) since 9.1.0.2 . Old versions use DPT9 (16 bits float). Old and new versions can not send values between each other. Only commands. It is recommended to have all devices on the same version.

For using the KNX Scenes Feature, you need to add a rule with the behaviour you want for that scene like: