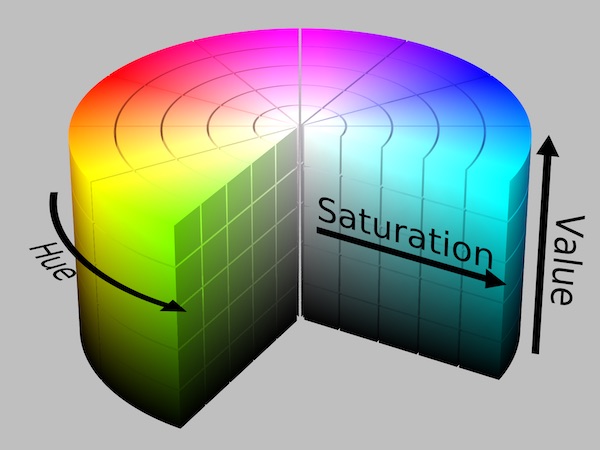 Tasmota uses a HSB color model, which besides other more subtile differences compared to HSL means, that the color must be desaturated to reach complete black or white.

See light commands for how to control lights. 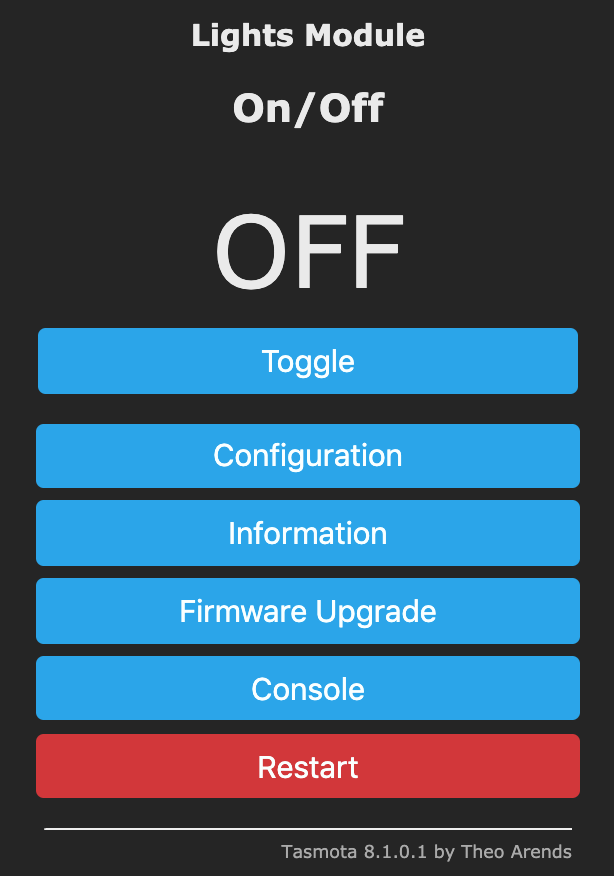 Switched or On/Off lights are controlled through Relay GPIOs.

If you define multiple relays, they are controlled with Power<x> starting at x=1.

Alexa: you can use Wemo emulation, your device will appear as a switch. You can change it to a light in the Alexa app.

Alexa: if you have one or multiple relays, you can use Philips Hue emulation. All devices will appear as On/Off lights, and named accordingly to FriendlyName. Note: if you have only Echo Spot 2nd generation, your light will have a dummy dimmer. 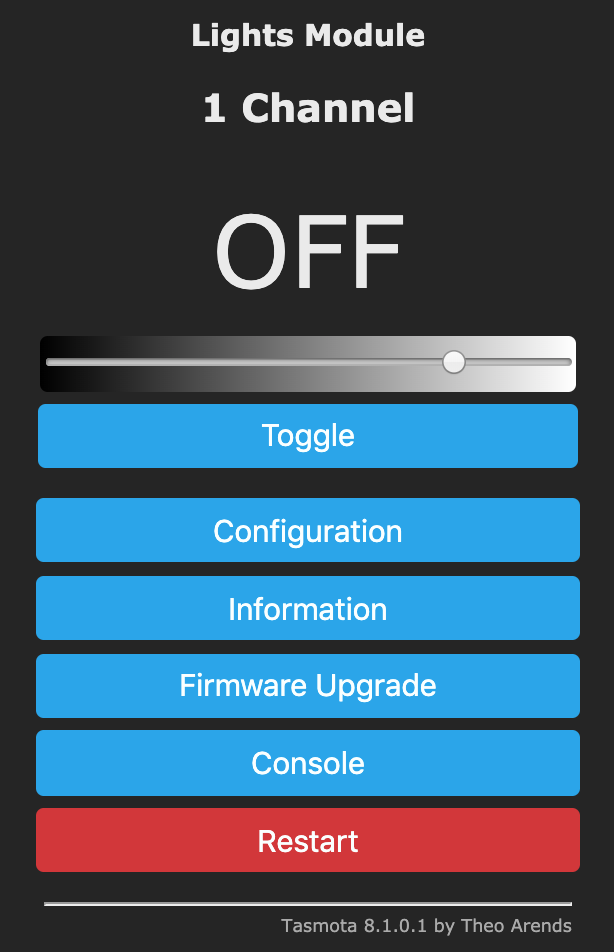 Alexa: you can use Philips Hue emulation, the light will appear as White light with Dimmer.

Leading edge dimmer You can also configure a leading edge dimmer on 230V with the 1 Channel configuration. In this case you need a TRIAC and a zero-Cross detection that give a pulse with every crossing of the 0V of the sinus curve. This is currently ONLY supported on ESP8266. A working ESP32 is "work in progress". 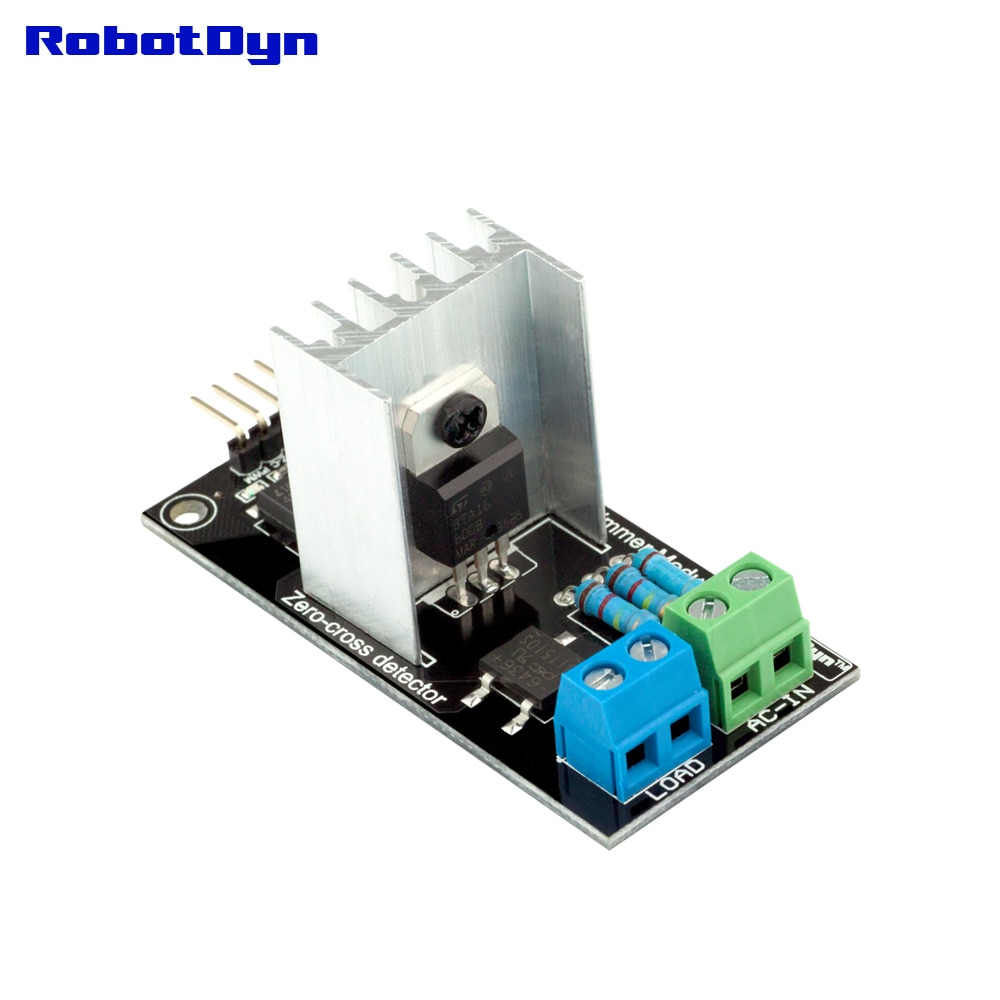 Define a COUNTER with the same number as the PWM (e.g. COUNTER1 & PWM1). You will need to connect the output of PWM1 to an input as COUNTER1. Connect zero-Crossing to GPIO of COUNTER4 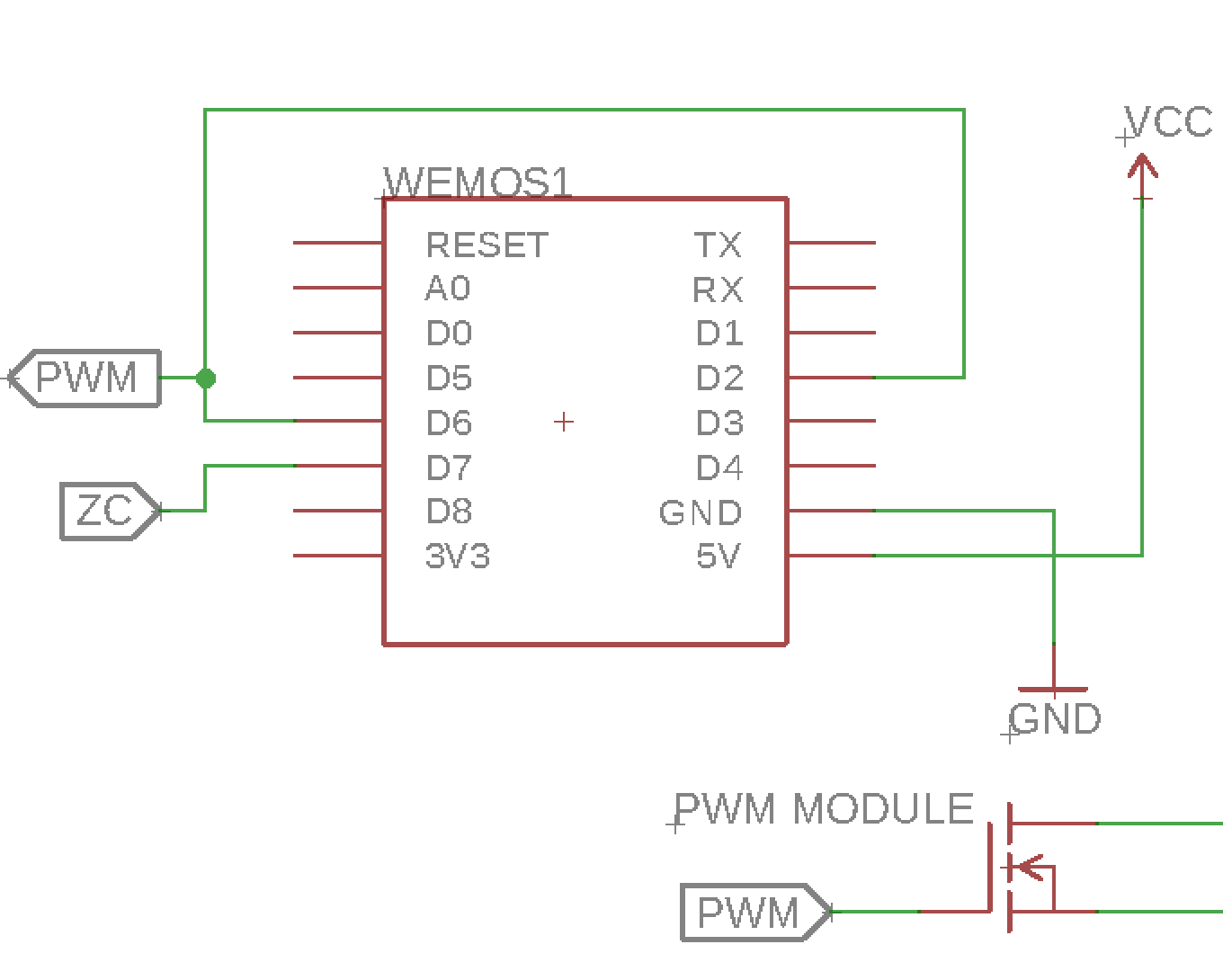 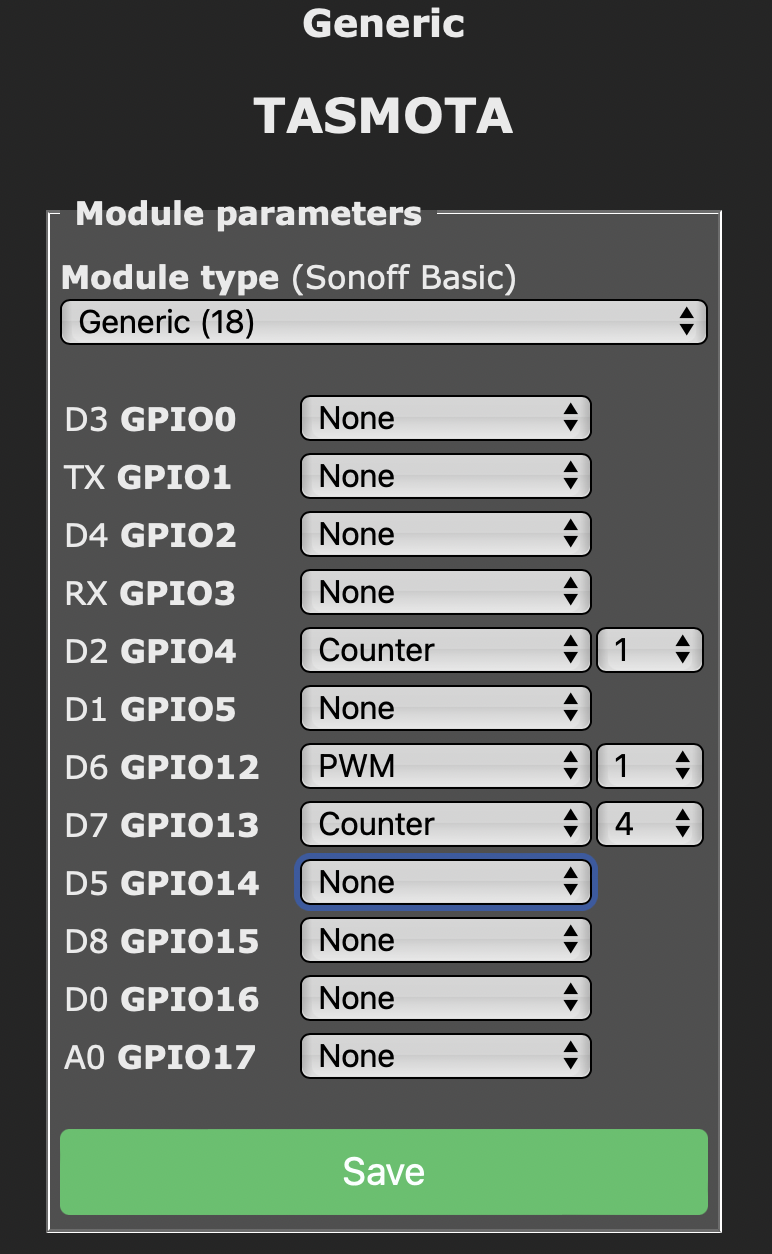 Preferably before connecting the ZC & PWM perform the following commands:

SETOPTION99 1 -> to enable detection of the raising edge of the zero-crossing.
PWMFREQUENCY 100 -> (50hz) or 120 (60hz) depending on the frequency of the main in your country.
LEDTABLE 0 -> for normal lamps or motors. 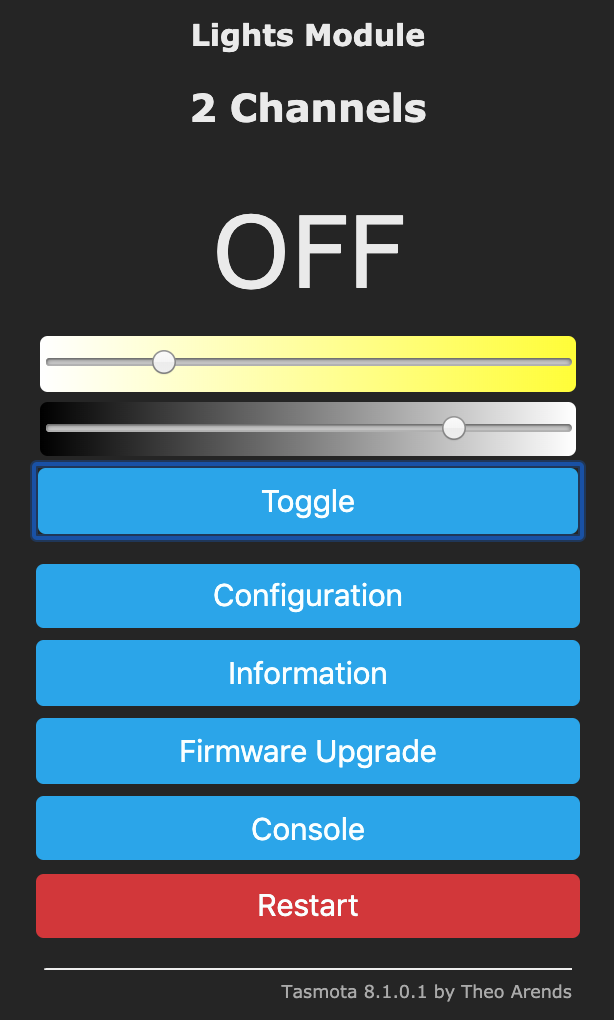 Alexa: you can use Philips Hue emulation, the light will appear as White light with Color Temperature. Control through the Alexa app is limited to the CT range 199..383. 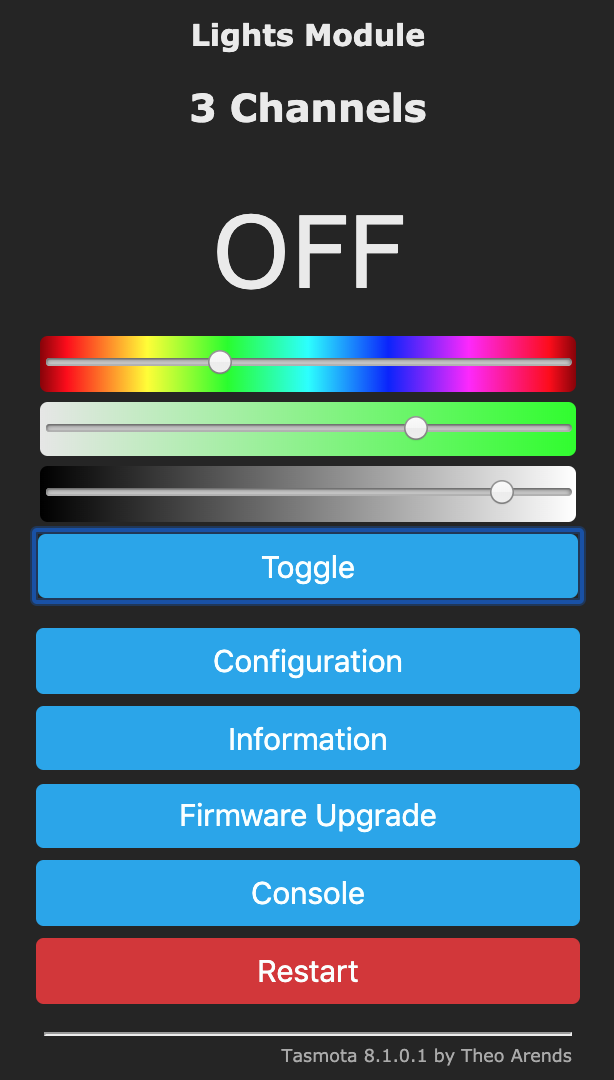 3 channel lights are RGB color lights. You can set color either via RGB or HSB (not HSL). Alexa support also allows XY color, but that is not supported through commands.

Alexa: you can use Philips Hue emulation, the light will appear as Color light. 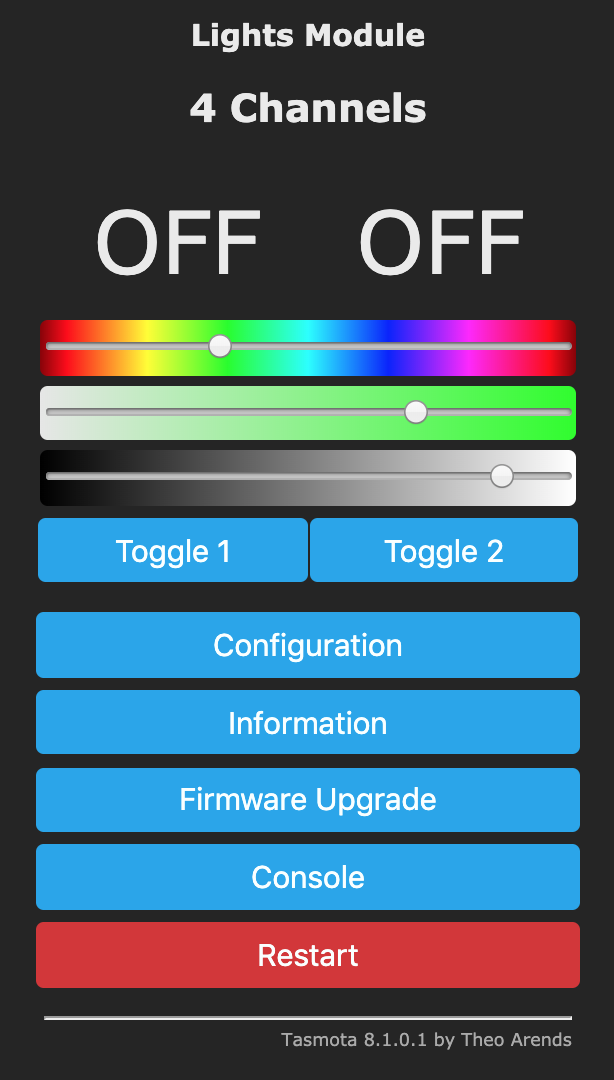 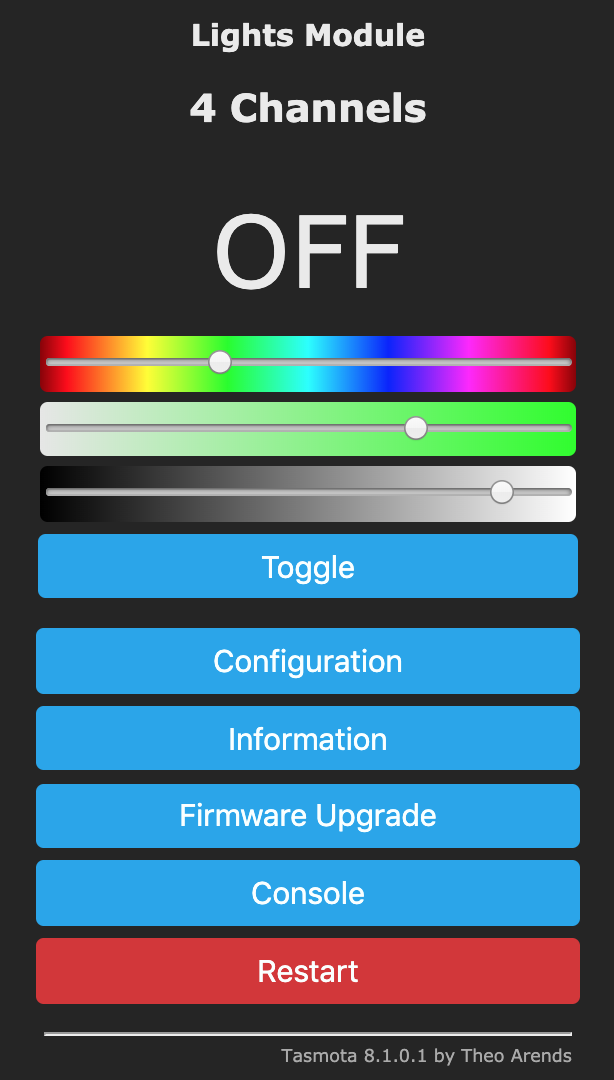 4 channel lights are RGBW, i.e. RGB light and an additional White light. White can be either Warm White or Cold White depending on the manufacturer.

Alexa: you can use Philips Hue emulation, the light will appear as Color light and White light with CT control. The CT control is only present to force pure white instead of RGB white. Changin CT will have no effect.

Use White commands or set up White Blend Mode or RGB and White Split. 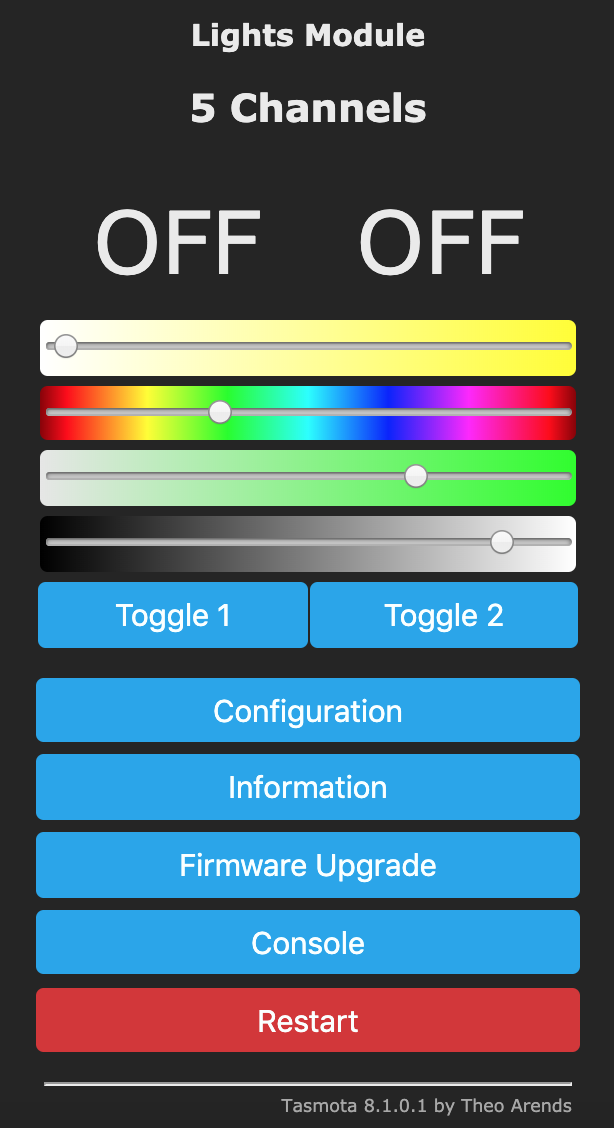 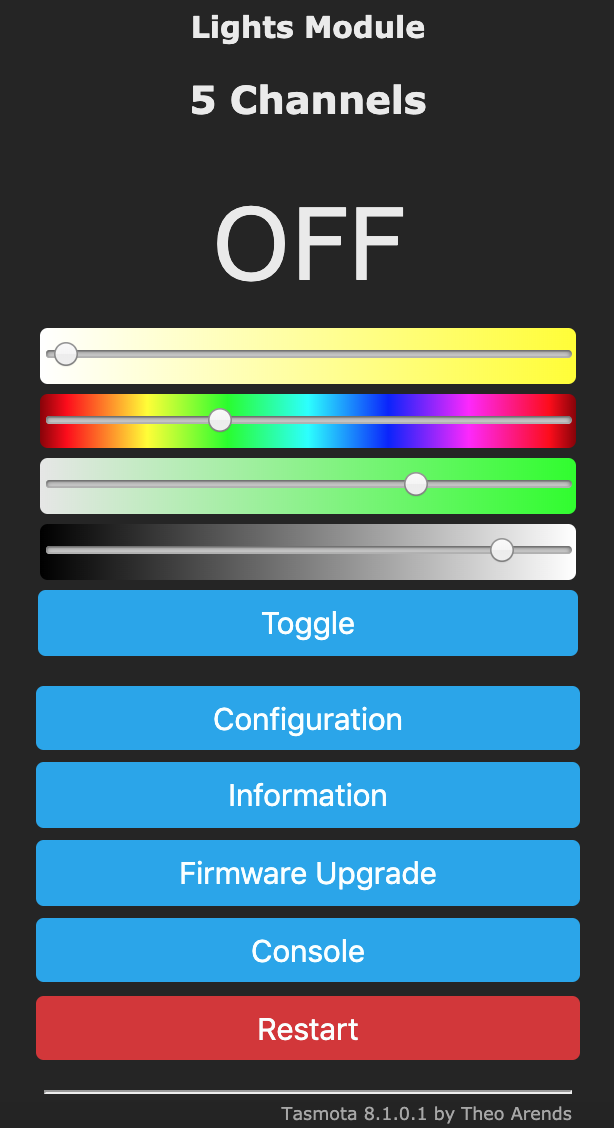 Alexa: you can use Philips Hue emulation, the light will appear as Color light and White light with CT control.

Some lights have limited power supply that do not allow all channels to be at full power at the same time. Be careful not to burn out your light if you force all channels via Color or RGB and White Split 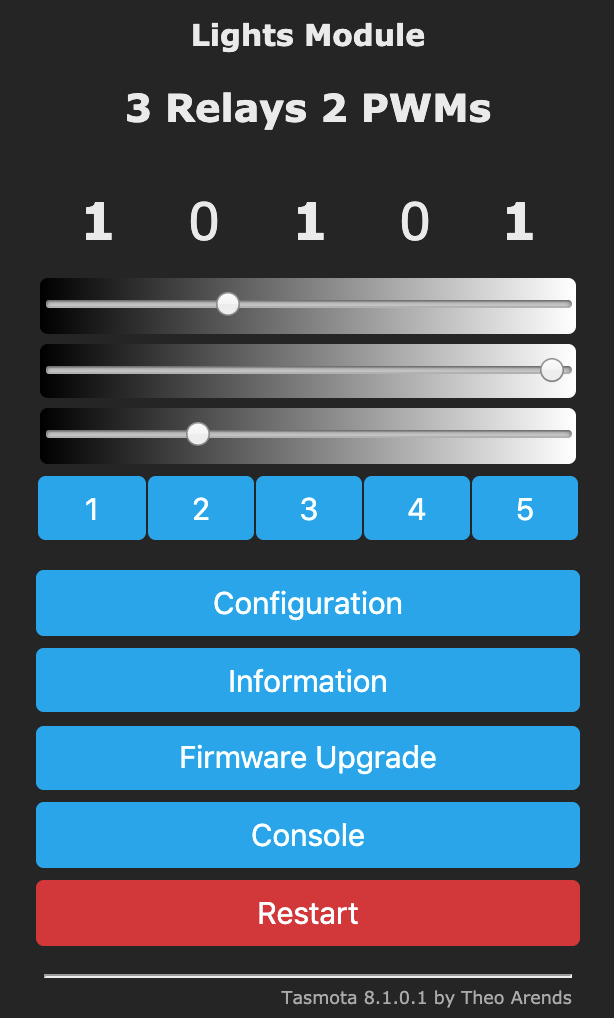 Any combination of Relays and PWMs, when enabling SetOption68 1. Splits off the light into individually controlled Channels (Useful when connecting multiple 1 channel strips to a single controller)

Gamma Correction is enabled by default in Tasmota (LedTable 1). 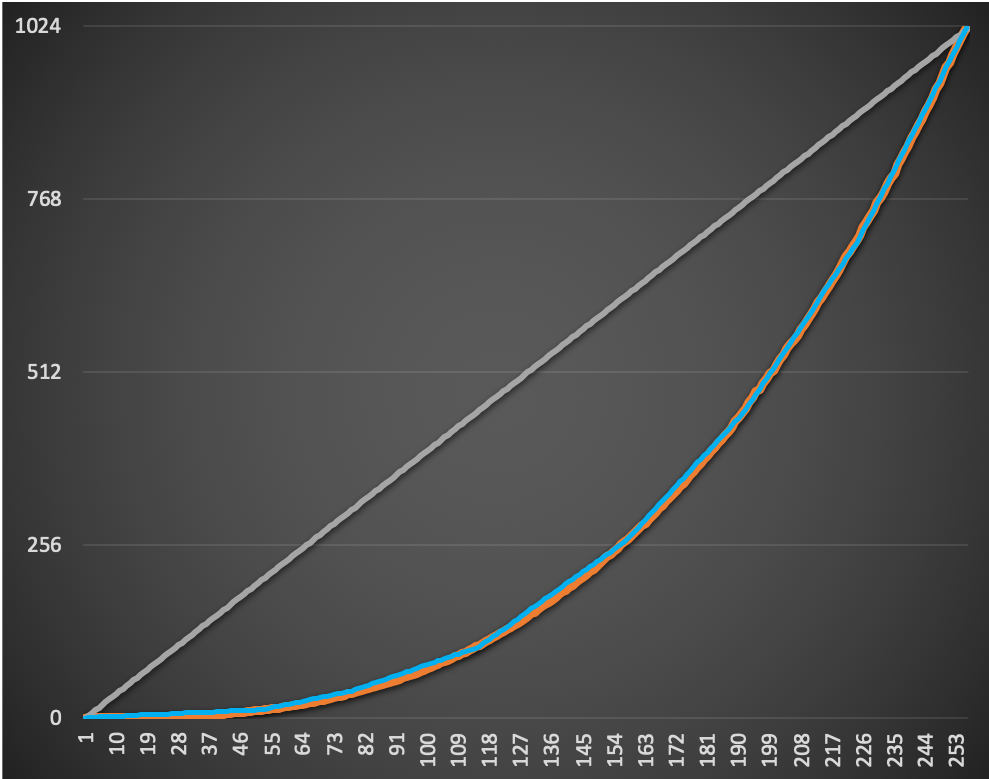 How do I know if I have hardware gamma correction?

If you find your light very dark even with Dimmer 40, it can mean either you have hardware PWM, disable it with LedTable 0, or you need to apply a minimum PWM value, use DimmerRange 40,100 (adapt to the best value).

White Blend Mode mixes in the white channel with RGB colors while controlling the RGB light which results in a better and brighter color output. It is used only with 4 channel (RGBW) and 5 channel (RGBCCT) lights.

Generally white LEDs are brighter than RGB LEDs. If you want to keep the same brightness, you need to calibrate the white level. In this mode, any white component will be removed from RGB LEDs and sent to the white LEDs. This makes whites look much better.

To calibrate a RGBW light:

By default RGBW and RGBCCT lights can only be controlled in single mode, either RGB or White (f.e. Turning on CT lights turns off RGB lights and vice versa).

Use SetOption37 128 to split RGB and White into 2 independent lights. If you are already using Channel Remapping, just add 128 to the value of SetOption37.

Lights are always powered on when a light command or a webUI slider is used and automatically powered off when color is set to black or Dimmer is set to 0.

When enabling SetOption20 1 any change to webUI sliders or using commands CT, Dimmer, HSBColor3, Color or Channel will not automatically power on the light if it is off.

this feature is experimental and will probably not give brilliant results

Lights come in various shapes (bulb, strips, ceiling lights, ...) but in Tasmota they are separated in 3 categories:

PWM (Pulse Width Modulation) is the most common method of controlling LED lights.

These lights are configured by assigning PWM1(i) through PWM5(i) components to their GPIOs; PWM<x>i means PWM is inverted. Depending on the number of used PWMs Tasmota will recognize the light as

Channel mapping for such devices is dependent on the controllers but is easily remapped using SetOption37.

Some SM16716 bulbs have BGR order and need SetOption37 54 to work properly.

Specific module (requires a custom binary) for Martin Jerry/acenx/Tessan/NTONPOWER SD0x PWM dimmer switches. Brightness of the load for these dimmers is controlled by a PWM GPIO pin. They typically have power, up and down buttons, a power status LED, five brightness LEDs and another status LED. Read more...

Lights where each LED is individually controlled. In these lights it is possible to adjust each LEDs power, color and brightness, all just with the use of a single GPIO pin.

WebUI shows hue, saturation and brightness sliders and power toggle for these lights. Red and green color may be mixed up (observed for clone of Wemos RGB shield).

Configured in Tasmota by assigning WS2812 (7) component to its GPIO.

Those LEDs are defined in a template or module using Led1, Led2, Led3 or Led4 (or Led1i, Led2i, Led3i or Led4i) and additionally using LedLink or LedLinki (LedLink was introduced in version 6.5.0.12). It is not recommended to assign Led<x> and Led<x>i with the same <x> number. Prior to version 6.5.0.12, Tasmota only supported up to two LED components to indicate the power state of the relay(s), and the Wi-Fi/MQTT connectivity status.

For example, on a Sonoff Basic the green LED is used as the link status LED. Once the device connects, the LED is used to indicate the relay's power status.

It blinks if the device is not connected to your Wi-Fi AP and MQTT broker (if MQTT is enabled). You can change this behaviour with LedState or turn it off with SetOption31.

Depending on the device design, some LEDs are connected to the same GPIO as the relay. Those cannot be independently controlled since they have to follow the relay state.

If you have more than one LED wired independently and you want it to show the power state of the relay, you must assign an LedLink GPIO.

Using LedPwmMode you can change the LED display mode from simple on/off to a PWM controlled LED which will enable you to f.e. display a brighter LED when the relay is on and a dimmer LED when its OFF so you can locate the switch in the dark but not have it obnoxiously bright.

LedPwmOff and LedPwmOn control the preset LED brightness in their respective states.

When you use LedPower you take over control of that particular LED and it stops being linked to its corresponding relay and being its power status LED.

LedLink / LedLinki is used to assign the link status LED. If your device does not have an LED for link status (or you want to use that LED for a different purpose), you can assign LedLink to an available free GPIO. When LedLink(i) is assigned, other LEDs are automatically linked to their corresponding relay and serve as that relay's power status LED - i.e., Led<x>(i) links to Relay<x>(i)

ESP32 has hardware PWM support, named ledc, for up to 16 channels depending on CPU type. You can mix lights and pure PWM channels. The first 5 PWM are reserved for lights, unless SetOption15 0. For pure PWM GPIOs, you can assign any PWM number, they don't need to be continuous. For example you can use PWM 1/2/3 for a 3-channel RGB light, and PWM 6 & PWM 10 for pure PWM at the same time.

Example of PWM console output with 16 PWM assigned. By default PWM range is 0..1023.

By default, phases of consecutive PWM are disaligned so that a PWM pulses starts when the pulse of the previous PWM channels ends. This helps in distributing over time all pulses and have a smoother effect on power supply.

You can revert this with SetOption134 1; all phases are synces and all pulses start at the same moment.

H-bridge is an electronic circuit that switches the polarity of a voltage applied to a load. It uses 2 PWM outputs to control the current sent to each polarity.

When auto-phasing is enabled, you can use 2 consecutive PWM to drive a H-bridge siunce PWM phases don't overlap - under the condition that the sum of both PWM don't exceed 1023.

You must always ensure that the sum of both PWM channels is less or equal than 1023. Values over this threshold can damage the circuit!!!