MQTT is the main protocol for controlling Tasmota devices

After you have a working MQTT broker you need to configure Tasmota to communicate with it. If you have no knowledge of what MQTT is, you can learn about it from MQTT Essentials articles.

If you flashed a precompiled .bin or didn't enter MQTT info in user_config_override.h before compiling you have to configure it on your device first.

While here, you might as well change the Friendly Name into something more descriptive than generic "Tasmota".
This is highly recommended for Home Assistant autodiscovery feature. 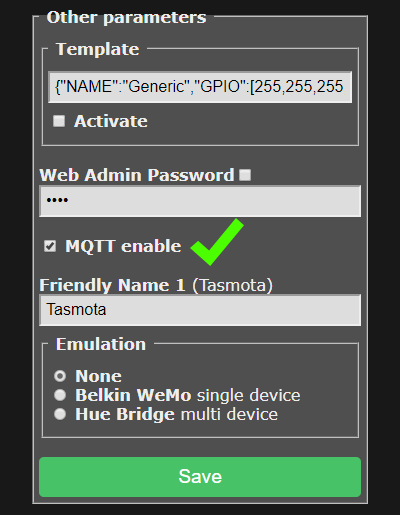 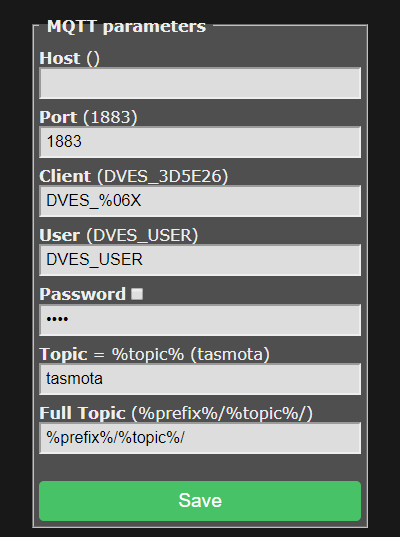 For a basic setup you only need to set Host, User and Password but it is recommended to change Topic to avoid issues. Each device should have a unique Topic.

Using a serial connection or the WebUI Console you can issue (or even better, paste a premade) Backlog command for quick and easy MQTT setup.

After a reboot all necessary MQTT settings are configured. Don't forget, you can use Backlog for all commands!

Commands over MQTT are issued to Tasmota by using topic cmnd/%topic%/<command> and payload <parameter>. If there is no <parameter> (an empty MQTT message/payload), a query is sent for current status of the <command>.

The following example will go in depth on what happens when you send an MQTT command.

A device was flashed and configured with the FullTopic as default %prefix%/%topic%/ and the Topic set to tasmota_switch. We want to see the current status of the switch and change it.

By looking at the commands table we can learn about the POWER command and options associated with it.

Ask the device for status~

We can see that the switch (device's relay) is turned off.

Send a command to toggle the relay~

We've sent the toggle command and received confirmation that the switch is turned on.

By default, Tasmota replies to all commands through .../RESULT. This behavior can be changed using SetOption4, which makes the commands reply on the endpoint matching the command name, ex. cmnd/tasmota/PowerOnState will send a response on stat/tasmota/POWERONSTATE.

In the following examples %topic% is tasmota, FullTopic is %prefix%/%topic%/, and prefixes are default cmnd/stat/tele:

While most MQTT commands will result in a message in JSON format the power status feedback will always be returned like stat/tasmota/POWER ON as well.

This is the MQTT topic used to communicate with Tasmota over MQTT. It is created using tokens placed within a user definable string (100 character limit). The tokens are substituted dynamically at run-time. Available substitution tokens are:

These substitution tokens will be used in examples across the documentation

If FullTopic does not contain the %topic% token, the device will not subscribe to GroupTopic and FallbackTopic.

The order of %prefix% and %topic% doesn't matter, unless you have enabled Auto-discovery for Home Assistant (SetOption19). Enabling this option re-formats the FullTopic to required order.

Using the tokens the following example topics can be made:

To solve possible MQTT topic loops it is strongly suggested that you use the %prefix% token in all of your FullTopics. Status and telemetry do not need a prefix.

All MQTT status messages will be sent using the configurable %topic% which must be made unique by the user. It can be called bedroom but it could also be called XP-TS_10 as long as the user knows what it is and where to find it.

The use of the %topic% token is mandatory in case you want to use ButtonTopic and/or SwitchTopic. It also provides for GroupTopic and Fallback Topic functionality.

Use %prefix% and %topic% tokens at all time within your FullTopic definition!

Initially Tasmota had one MQTT configurable topic planned called Topic. It soon became apparent that when two devices come online with the same topic this would be a challenge, to say the least!

By default the Fallback Topic is DVES_XXXXXX_fb where xxxxxx is derived from the last 6 characters of the device's MAC address (excluding :). It might look something like this: DVES_3D5E26_fb. You can find out the DVES code by looking at Information page in the webUI or issuing Status 6:

LWT Topic (Last Will and Testament)~

On connection to the MQTT broker tasmota uses the Last Will and Testament (LWT) feature that instructs the broker to generate a notification about an ungracefully disconnect or timeout.

The topic to listen to for the state of this specific client is tele/<TOPIC>/LWT that with the mosquitto MQTT broker produces an output like:

The full LWT topic can be found in the tasmota console at boot:

If MQTT is defined and retain option is used the last state will be stored permanently in MQTT database.

BUT, a power message in your MQTT broker flagged as 'retained' will always override the PowerOnState.

This is usually the main cause for "ghost switching". Learn more in MQTT retained messages explained. Check out this tutorial for troubleshooting switch ghosting.

To check, if there is a retain flag set for the switch's power topic, monitor cmnd/+/power in a MQTT client (recommended MQTT.fx for Windows or Eclipse Mosquitto in linux).

You can use Tasmota Device Manager to clear all retained messages for selected device with a single click.

or use the following tutorials/forum threads:

Subscribes to an MQTT topic and assigns an Event name to it.

The <key> parameter is specified when you need to parse a key/value pair from a JSON payload in the MQTT message. In order to parse a value from a multi-level JSON pair, you can use one dot (.) syntax to split the key into sections.

You subscribe to an MQTT topic and assign an event name. Once the subscribed MQTT message is received the configured event will be triggered.

Command without any parameters will list all currently subscribed topics.

You can set up a rule with ON EVENT#<event_name> DO ... ENDON to do what you want based on this MQTT message. The payload is passed as a parameter once the event has been triggered. If the payload is in JSON format, you are able to get the value of specified key as a parameter.

For example, if you have a Tasmota based thermostat and multiple temperature sensors in different locations, usually you have to set up a home automation system like Domoticz to control the thermostat. Right now, with this new feature, you can write a rule to do this.

Unsubscribe from topics which were subscribed to using the Subscribe command.

The command without a parameter will unsubscribe from all currently subscribed topics.

Sometimes, something wrong can happen and you might need to check return codes.

Below table provides more information about it. The original values are related to PubSubClient.h constants.