Template is a definition of a device and how its GPIOs are assigned.

Templates provide an easy way for you to create, modify and share configurations for various devices that have features supported in Tasmota.

To provide easy processing by Tasmota a template is written as a JSON string and looks like this:

Tasmota Supported Devices Repository has a complete list of supported devices. We encourage everyone who creates a template for a new unknown device to submit it using Add New Template form.

... and you'll end up looking at this screen.

Time to create your template.

Now that you've set up your previously unsupported device in Tasmota it is time to share the knowledge:

Go to Configuration - Configure Other 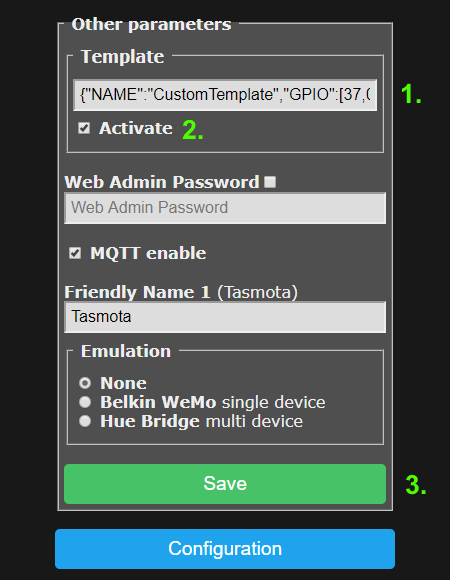 The device will reboot with a name reflecting your template name and Module 0 selected which has your new template stored.

If your device was previously configured you will have to manually change to Module 0 in *Configuration -> Configure Module*.

A user provided template can be stored in Tasmota using the Template command. It has the following parameters.

Template {"NAME":"AnotherModuleName"} updates the name of a stored template

Template {"BASE":18} updates the base of a stored template to Generic

After setting a template in command line it is necessary to issue Module 0 command if the device doesn't reboot on its own.

You can set up your device in module *Configuration -> Configure Module* and use command Template 255 to merge the settings of the Module with current template into a new Template named "Merged".

Anatomy of a Template~

The four properties with UPPERCASE property names have the following functionality:

The GPIO functionality numbers are the same as shown by command GPIOs. In addition code 1 is added to select a GPIO as user configurable via the GUI Configure Module menu.

In our example the GPIO 12 data element is 32 which corresponds to the Button1 component, according to the components table. If you change that template element to 160 it would then be assigned as a Switch1 component instead.

See Components for a complete list or use command Gpios 255 in console.

Before Tasmota 9.1 used to configure the ADC type. In new templates this should be set to 0 and the analog pin should be configured on GPIO17

BASE is the starting module setup for the custom template. Some modules include special programming. If your device is similar to an existing built-in module it is best to use that as a starting point. When you're not sure which BASE module is suitable for your device use the Generic (18) module. A list of hard-coded devices can be found in Modules.

In the RGB Smart Plug template we used the BlitzWolf SHP (45) module as BASE since the power monitoring circuitry is identical but GPIO00 and GPIO02 were changed and an unused GPIO04 was added to enable the RGB LED function. Using that specific module we took advantage of that module's calibrated power monitoring special programming which the Generic (18) module does not use.

CMND is an optional field in the template JSON string. It is used to embed commands for configuring the device instead of needing to type them in console. Multiple commands are separated with |.

Commands will only be executed if the template is enabled (device module is set to 0), either before the template is loaded, when the activate box in the UI is selected or if the module 0 command is included in the CMND string itself.

Total size of the template string should not exceed 500 chars.